Roadside Cafe Keeps Them Coming Back for Seconds

Grammy’s Kitchen. These two simple words conjure up generations of delicious smells and sweet memories. It’s the place you go to for the good eats and specially-baked treats.

And so it goes for regulars and visitors to Grammy’s Kitchen located off CO Highway 17, just south of the town of Moffat in Saguache County. In fact, this breakfast-lunch-dinner, roadside eatery has established its reputation for offering traditional, home-cooked meals, at a reasonable price, since it opened its doors in January 2018. After all, this is the San Luis Valley, home to the hard-working people who work the land.

“Dad always saw it as a gathering place for the farmers and ranchers to get together, have some coffee, and catch up on the valley news,” said owner Tina Freel in a recent interview with Saguache Today. Dad was Terry Lee “Ted” Freel, a fourth-generation family man, dedicated farmer and rancher who bought the roadside building in 2013 with the intention of starting a restaurant which his daughter could own and operate so that she wouldn’t have to make the trek over Poncha Pass for work every day.

“For probably the past 25 years, I knew I wanted a restaurant, having worked in food service pretty much, off and on, my whole life,” said Tina Freel who was born and raised in Moffat.

So six years ago, Terry Freel bought the building which had sat empty for nearly 20 years on the side on Highway 17, and the father and daughter team got busy with the renovation, creating a community meeting and eating place for the town. As these things go, it took years to remodel the building with salvaged materials from around the valley and months and months of sweat equity. But finally, in January 2018 Grammy’s Kitchen opened. Unfortunately, the celebration was bittersweet.

“While we were building it, Dad ended up being diagnosed with a rare form of leukemia.” Tina pauses, steadying her voice. “And so he didn’t make it, to see it open. But he’s here every day.”

In fact, Terry Lee “Ted” Freel is respectfully honored at a table for one situated upfront which bears his name along with his favorite things. But it’s not the only familiar thing that locals may notice.

During the renovation of Grammy’s Kitchen, the town of Moffat was simultaneously building a new school and tearing down the old one(s). The Freels ended up salvaging a lot of materials from the old schoolhouse(s).

“We bought a lot of their equipment,” explained Freel. “The window between the dining room and kitchen is an original from the 1921 schoolhouse.” But perhaps the most notable repurpose project is the dining room floor. In fact, patrons of the restaurant might just hear the sneaker squeaks from the five generations of Freels who played basketball on the oak and maple planks harvested from the old gym, as well as recent hard-wood rehabs, which have been lovingly pieced together, creating the foundation of this family-run-and-built business.

And if the building at the corner of Highway 17 and W. 15th Street represents the soul of the eatery, then it’s heart can be found in a bowl of chicken noodle soup or on a plate of mouth-watering chicken fried steak with all the fixings. Because that’s where Grammy Freel comes into the kitchen. 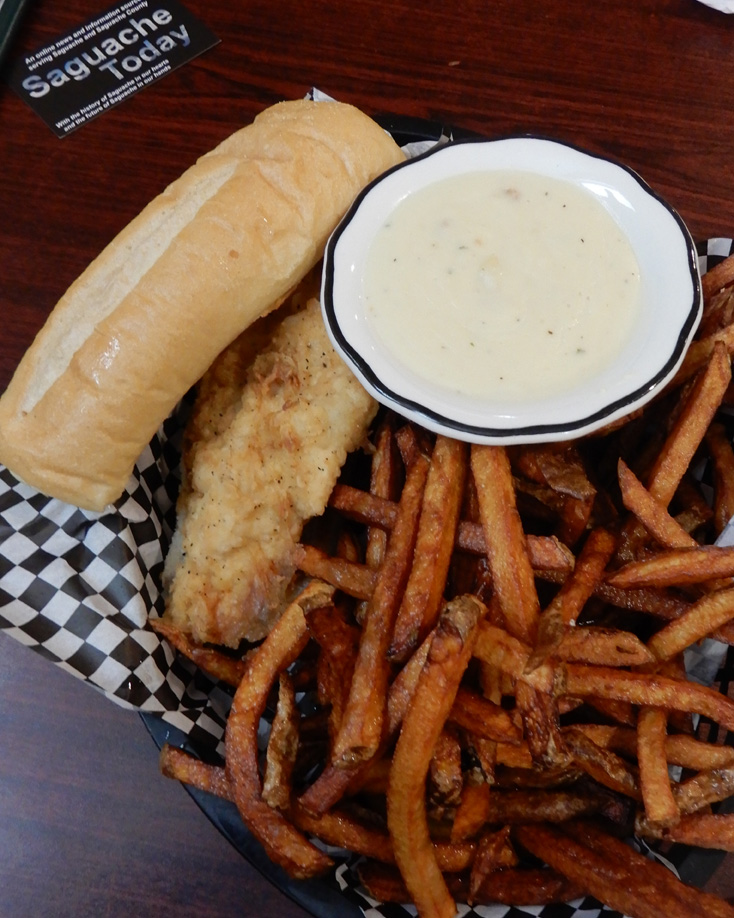 “We named the restaurant after my Great Grandma, who everyone in the town of Moffat knew as Grammy Freel,” Tina said. But it’s all-in-the-family when it comes to recipes, including her mother’s bread – all baked on-premises – and green chili recipes.  View MENU HERE.

When asked about locally sourced food, Freel joked, “No because all of the farmers around here grow weed, and I don’t want any of that in my food. Green is good, but we ain’t going that green!” And while she may not be using any of that green in Grammy’s Kitchen, Freel is seeing the return on her family’s investment with the greenbacks which are ringing the register, albeit it from a slightly different clientele than they originally anticipated.

“Oh, I’m feeding farmers,” laughs Freel, referring to her father’s original vision of hay farmers having coffee along aside ranchers. “But it’s pot farmers, not hay farmers. And it’s sometimes two and three times a day.” In fact, in the middle of the San Luis Valley on a cold winter’s day, it’s the crews building the hemp-grows and then farming their plots, who are gathering for coffee and valley news, explained Freel expressing her gratitude to be feeding any kind of farmer in Moffat these days.

But it’s her fresh menu and the generous portions that keep those farmers coming back for more. And on Saturday nights, Grammy’s Kitchen offers a Prime Rib special that brings in a pretty good crowd, so plan ahead.

There’s plenty of seating and they have the capacity to accommodate bigger groups, evidenced by the large group of crafters exiting the restaurant after an afternoon gathering of good food and neighborly news. The dining room has a pot-bellied, gas-powered stove in one corner and a small, yet lovely display of local crafts and arts in the other. The eatery has two clean, gender-neutral bathrooms with one big enough to accommodate family and mobility challenged needs.

Down the road, Tina plans to clear off several lots to the south to accommodate the big rigs, hauling goods from Denver to Durango. But for now, motorists biggest challenge will just be pulling off the highway safely, just look for the Grammy’s Kitchen billboard sign painted on the side of an old shipping container.

Grammy’s Kitchen is located at 17396 CO Highway 17 in Moffat. They do to-go orders. You can call them at (719) 256-6000, or connect on their Facebook Page. During the winter, their hours are Tuesday thru Sunday 8 a.m. – 6:30 p.m. They are closed on Mondays. At some point this spring, the eatery will return to its summer schedule, open seven days and week. So, stop in and check out this eatery, where the delicious smells will bring you in and the great food will have you coming back for seconds at Grammy’s Kitchen.

Hitting The Road: Into The Valley

Why Census 2020 Matters in Saguache Today